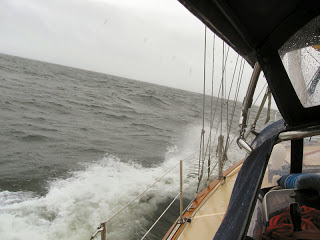 After “Powering to Portland” in 20-25 knots of NNE winds and 3-5 foot seas, we arrived Portland after a very rough passage from Kittery Maine. Of course the forecast was for EAST winds, which would have worked well on a course of NE, but after about 2 hours of East winds, the winds shifted to NNE and increased to 25 knots. Now we had 47 miles to go with the wind directly on the bow. The waves became the problem as they were still running from the EAST and hitting the boat directly on the beam. When 3 foot waves hit the boat on the starboard beam, the boat first rolls hard to port, then the wave goes under the keel and then the boat lifts and rolls hard to starboard laying its midship cleat onto the water.

We had a double reefed main and a cutter up to help slow down this rolling from side to side, but it really got tiring after 6 hours. Items were flying out of all the cabins, we were tossed off the helm seat many times, and the best way to deal with this was standing up at the helm and working it as if you were a slamon downhill skiier! Oh what fun! Now its time to enjoy Portland Maine, and our Island Packet friends Bill and Fran.

The conditions at Portland Head Light as we approach 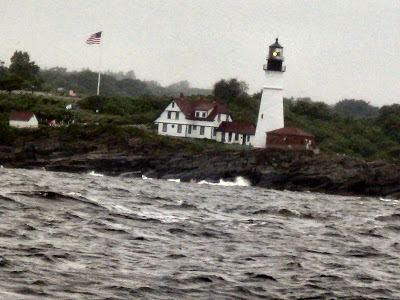 We are staying at Centerboard Yacht Club http://www.centerboard.org/ they also have a live web cam where you can see the view from the dock looking out over the mooring field and over to Portland Maine.